This Sunday at 7pm on Channel 4 (British TV) is the first of my 3-part series exploring my incredible journey around this stunning Central American country. 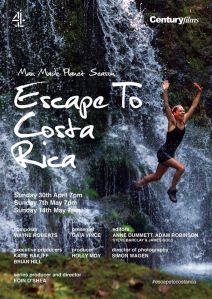 Why Costa Rica? This little country – the size of Denmark – is gorgeous. It has tropical rainforests, cloud forests, the deep and wild Pacific, the warm Caribbean, exhilarating rivers, violent volcanoes, indigenous people, Latino culture, surfers, cowboys…. and it’s the happiest place on Earth.

I am interested in how humans are changing our planet through our culture and technologies, and the effects of those changes on us. We’re living at an exceptional time. The changes we humans have made in recent decades have altered our world beyond anything it’s experienced in it’s 4.5-billion-year history. As a result, our planet is entering a new geological age that scientists are calling the Anthropocene, the age of humans. What will the Anthropocene be like? Will it be good or bad? I travelled around the world to explore this, and wrote a book about my Adventures In The Anthropocene.

Costa Rica offers us an window into a rather appealing version of our Anthropocene. This is a developing country that got rid of its military to instead fund a universal healthcare and education programme; that is growing its economy rapidly whilst also protecting its environment; and that consistently ranks top in the global happiness index. Pretty remarkable.

But what’s most remarkable is that a few decades ago, Costa Rica was a very different country. Poor, struggling with violence and caught in international drugs wars, this was once one of the most deforested nations in the region. A visionary president with courage and ambition helped turn it around. Now, an emphasis on nature and conservation means that Costa Rica protects more than 25% of its land and half of its coastline, it runs its national grid almost entirely (99%) on renewables, and vast tree-planting make it the only tropical country to have reversed deforestation. By 2021, the President tells me, the country will be carbon neutral.

This is a country that chose what sort of Anthropocene it wanted and set out to deliver it. An extraordinary and inspiring story obviously made for television!

Making a television series was not so obvious.

I teamed up with producers Brian Hill and Katie Bailiff at Century Films in London, who make beautiful documentaries about social and environmental issues – a perfect fit. We worked on an idea and presented it to Channel 4, where Ralph Lee shared our vision and enthusiasm and commissioned it to become part of a manmade planet season. So exciting!

Making TV documentaries takes a team of people doing long hours of hard graft to produce something that is effortless to view. Key to this magic is the director, and I lucked out with the formidable Irish bear that is Eoin O’Shea, who had the talent and creative ambition to take a rough idea (and rougher presenter) and produce a coherent 3-part narrative. The talented producer Holly Moy and veteran Bristolian Si Wagen, master of exquisite camerawork, also travelled out from London to San José with us. The rest of the team – soundman Erick Vargas Williams, production assistant Ana Lucia Arias and data manager Saul Garcia – were locals, helping keep the series a more authentic portrayal of the country.

It was hard work at times, especially as I travelled out with Nick and our 1-year-old and 3-year-old. There were plenty of sleepless nights (she’s only recently started sleeping through the night – hallelujah!), and times when I had to leave them for several days. Filming days were long and hard and stressful. I’m used to being in control of my work and my schedule, and it was difficult to relinquish that. But it was never boring, and it was never meaningless. It was often exciting, and a chance to explore an amazing country and people, and some truly fascinating stories with a team of brilliant fun people that have become my friends.

I hope you enjoy watching it.