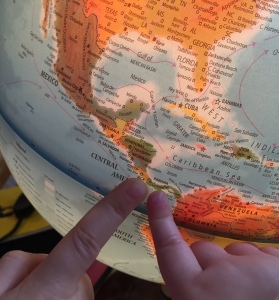 It’s been a while but we’re off adventuring again. We’re leaving london for a few months to explore Costa Rica and this time there will be four of us.

Yes, since our last big journey, I’ve given birth to a book and two small humans. In that time, the world has come together to try to address our climate change challenges, which is a hugely significant step and a cause for optimism.

However, despite this collaborative step, nations are regressing into isolationist nationalism. There is a rise in extremism in formerly moderate countries and with it a rise in prejudice and hate directed at women, minority groups, people with darker skin or different accents.

We are far more similar than we are different – genetically we are almost identical and of a mixed tapestry of interwoven origins. But that is science and, as we are being continually told, we now live in a post-truth world. The man elected to become one of most powerful in the world, Donald Trump, and his powerful friends seem to revel in undermining science and our understanding of earth systems and the natural world, and in destroying the achievements humanity has made towards respecting each other despite our differences.

This shocks and profoundly worries me. I want to continue to believe that we share values of human decency towards each other, to protecting human rights and the environment we share. Time will tell.

In the meantime, the planet continues to be transformed under our influence. In the Anthropocene (the Age of Humans) we face significant challenges and we need strong leadership to captain us into a world of some 9 billion people, limited resources and an unstable climate. This is an extraordinary time. The decisions we make now will affect the planet for centuries to come.

On the urgent to-do list is: climate change, extinctions, freshwater loss, and more. None of these can be addressed in isolation, and none without looking at the root cause of the problem: us. Social issues are entirely enmeshed in our environmental problems. Happily, the solution to one can very often be the solution to the other. It is only by understanding and meeting our human needs in concert with the natural world that we will find palatable solutions for our problems.

So I’m off to Costa Rica to look at how this small but fascinating country is meeting our shared global challenges.

Between the Pacific and Atlantic Oceans, in the heart of Central America, this little nation has been running a socio-environmental experiment, aiming to protect and nurture its natural resources, as well as the health and wellbeing of its people – and that requires a healthy economy. Can it be done?

I’m heading off to the land of rainforest and cloud forest, volcanoes and waterfalls, sloths and whales, to find out. And I’m bringing my two young children. I want them to discover a different world from london, where people eat different foods, speak another language, and where nature dominates much of the country. I want them to have new experiences but I’m also conscious that it may be their last chance to see some of this bountiful nature. They will never know the incomparable coral reefs of my childhood, it is too late for that. But for the many creatures and plants that are on the edge of extinction, it is not yet too late.

Most of all, though, it is their generation that will inherit this planet. I want them to value its diversity, to know what we all stand to lose, to see that there are different ways of living, of producing energy and food, and different ways of being happy.

This time some of our adventures will be filmed, and I don’t mean my amateur attempts at using video – we’ll be meeting up with a television crew out there to make something beautiful and meaningful, I hope.

I don’t know what we’ll find, there will be inspiration, disappointment and everything in between. But I know it’ll be interesting.

I’ll try to post updates here, so do join us!