1985: Mikhail Gorbachev. 1990: Vaclav Havel. 1994: Nelson Mandela. 2008: Barack Obama? Without the benefit of hindsight, it’s difficult to know whether it fits on such a list, but this week’s decision by the US electorate feels momentous. With the biggest voter turnout for a century, it’s a vindication of democracy in the USA. Obviously Obama’s colour is a huge part of the reason for excitement, but it’s not the whole. Hope thuds in the heart.

I haven’t forgotten the exhilaration of 1997 in the UK: a landslide victory for the young, charismatic, intelligent, Tony Blair who brought a new agenda for social reform after nearly two decades of unpopular Tory government. Things could only get better. 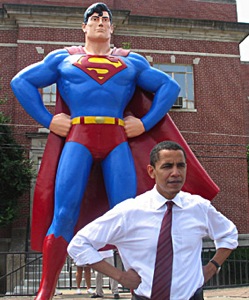 This feels bigger. It is bigger. Obama is elected by the third most populous country, by the world’s superpower. The world expects. We need a New Deal. At the eleventh hour, will Obama rescue humanity from the climate crisis by kickstarting the processes needed for global emissions cuts? Can we look to the States for leadership on human rights and for diplomatic solutions to global conflict?

There is so much at stake, but I’m optimistic. The world already feels safer. Bring on January!